Popular Demonstrations: A Source of Hope for Change

Mgr Najeeb Michaeel Moussa, a Dominican, is Chaldean Catholic Archbishop of Mosul and Akra. He was interviewed by Amélie de La Hougue of the international Catholic pastoral charity ACN International. He spoke about the situation of Christians in Iraq, from the time when anti-government demonstrations were still continuing in the country, before the arrival of the Coronavirus.

ACN: Archbishop, what is the situation today in Iraq in the light of the Coronavirus outbreak?

Archbishop Najeeb: The healthcare situation in Iraq today is extremely fragile, with a lack of testing facilities for detecting the epidemic. Draconian measures have now been taken to avoid the worst of the virus, and self-isolation has been imposed on most of the country.

The autonomous region of Kurdistan has been the most consistent and exemplary in regard to the measures taken by the regional government. The roads between the towns and the villages have been entirely cut off, and even between the different districts of the towns. The army and the police are on the street corners, preventing all traffic except in case of emergency. That is why today, throughout Iraq, there are only 316 cases, of which 20 or so are in Kurdistan and 10 or so in Mosul. The country has so far had around 20 deaths as a result of the epidemic.

Has the Church taken any specific measures?

The churches have been closed as a precaution. Mass and other liturgical activities, such as the Holy Rosary, continue to be transmitted entirely via the web and Facebook, either live or recorded. This confinement has been an opportunity to reassess and strengthen family values. Although the churches have been closed, each family has now become a living domestic church. 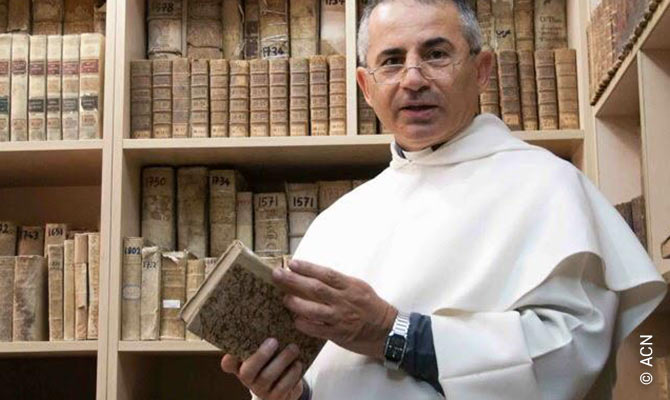 Are the anti-government demonstrations continuing in this context?

The popular demonstrations in Baghdad, on Tahrir Square, against unemployment and corruption and calling for the resignation of the government, have slowed down as a precaution. The self-isolation and the other health measures introduced by the health ministry are broadly being respected. The situation in Mosul and in the Nineveh Plains remains relatively calm. But the return of the Christians to Mosul remains slow and hesitant. The forced departure of the Christians and the massacres of the Yazidi from June 2014 onwards forced members of both communities to flee their home country. The fanatical ideology continues to reign in many minds, and some people are still dreaming of driving all the Christians out of their historical dwelling places. Today, though, following the military defeat of Daesh, the Iraqi people are more than ever eager for solidarity, justice and freedom. The popular demonstrations of the past five months and the massive uprising against the corruption that has dominated the country since 2003, are the best example of the unity and the goodwill of the Iraqi people.

Where does the Christian community fit within this movement?

The Christian community desires a real and profound change of the political system and a competent presidential government that is secular and not clan-based (because of the tribal system) or religiously biased. Christians were among those demonstrating on Tahrir Square in Baghdad and they too had their own martyrs for these same causes. In the northern regions, the cities of Mosul, Kirkuk and Iraqi Kurdistan chose to ban these popular uprisings on account of the delicate situation they have been through. Those who wished to demonstrate were instead invited to go to Baghdad as the symbolic place to express their solidarity.

What are the hopes of the Christians in the months and years to come?

The hope of the Christians is to be able to live in peace in their own country on the basis of equality of rights and duties, on exactly the same basis as the other Iraqis and not as second-class citizens or as dhimmis (the discriminatory status accorded to non-Muslims).  They continue to demand their rights for the revision of certain unjust laws. For example the forced conversion to Islam of young underage girls, if one of the parents should become a Muslim. The Christians are also demanding the right to equality of the sexes with regard to matters of inheritance, marriage, freedom of religion and so forth. For the state religion in Iraq is Islam. Moreover, Christians do not have the same opportunities in the workplace and cannot occupy certain positions. The only hope for the Christians and for the other minority religions, such as the Yazidi’s, the Mandaeans, the Zoroastrians and the Kaka’i (Arsans), would be the disappearance of the Salafist mentality. Sadly, however, this sectarian mentality continues to impose the sharia within the Iraqi legislation. The school textbooks and the sectarian preaching in the mosques are a source of social and political division. The separation of politics and religion would be a blessing, and could certainly ease the Calvary that the Christians have been so painfully enduring ever since the seventh century.

What is the greatest fear of the Christians today?

The greatest fear, and one which prevents Christians from returning to their former homes in Mosul, is that of seeing the renewed growth of Islamic fundamentalism.

And for your own part, how do you see the future of the Christians in Iraq?

Personally, I am optimistic regarding the future of the Christians in Nineveh and in Iraq. Through education and culture we can overcome obscurantism and violence. Kurdistan, on our own doorstep is showing that citizens can live in peace, beyond their religious differences. The popular ferment and the peaceful demonstrations in Baghdad present a great opportunity for change in Iraq. Sooner or later the last word will be for peace and not for the sword.

ACN has done a great deal to support Christians persecuted by the so-called Islamic State. Over the past few years, over 47 million Euros in emergency relief have been approved by the international Catholic charity. Between June and August 2014, more than 120,000 Christians, along with other minorities, were driven out of Mosul and the Nineveh Plain in northern Iraq by Daesh jihadists. ACN has also initiated the campaign “Back to the Roots” to encourage the return and to support the people who were driven out of the communities destroyed by IS.

The most recent project launched by the foundation involves the restoration of the parish church of St. Kyria in Batnaya, a Chaldean Catholic village in northern Iraq, as well as the repair of the Chapel of the Immaculate Conception, the library, the hall and the parish house. Also included in the project is the reconstruction of the Dominican convent of St. Oraha (totally destroyed) and the nursery school run by the nuns, which will be able to accommodate 125 children.