A Beacon of Light for Baghdeda (Qaraqosh)

On August 6, 2014, IS units conquered and razed to the ground the Christian settlements of the Nineveh Plain, north and east of Mosul. Some 120,000 Christians had to flee overnight. Qaraqosh-Baghdeda, 20 miles east of Mosul, was the largest Christian city in Iraq. After Iraqi forces and their allies were able to recover the territories in October 2016 tens of thousands of displaced Christians returned to the ruins of their home cities. According to the latest data published by the Nineveh Reconstruction Committee (NRC) almost 50% of the 11,111 Christians families resident prior to the IS-invasion have returned to Baghdeda.

On the sixth anniversary of this “dark night” for Iraqi Christianity there are other glimmers of light and hope.  One beacon of light and hope, doubtless, is the ongoing work for the restoration of the Great Al-Tahira Syrian-Catholic Church (Church of the Immaculate Conception) supported by Aid to the Church in Need, one of the major partners for the building and reconstruction programs of the local Christian communities in the Nineveh Plains. 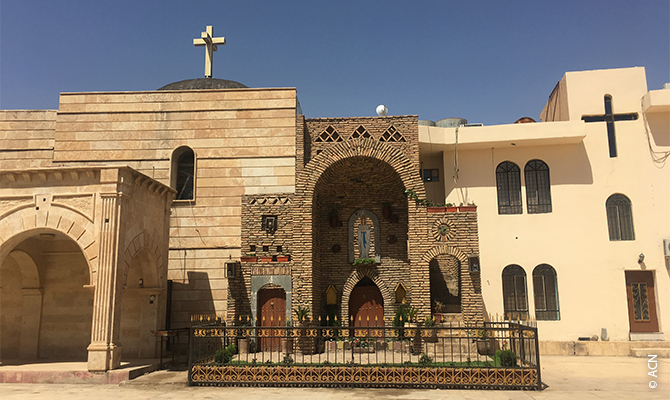 The Al-Tahira Church is one of the most important centers of the Catholic Church.

“This church is one of the most important centers of the Catholic Church. The ISIS attack on the city caused a lot of destruction and devastation; the church was severely damaged, burned down, with valuables and furniture looted. The Church’s clock tower was dynamited, with the clock itself lost, and numerous paintings and religious objects were severely damaged” explains Father Ammar Yako, who oversees the restoration work of Al-Tahira.

The Church’s courtyard contained a replica of the grotto of Lourdes. During IS occupation from August 2014 to October 2016, it was used as a firing range. Bullet holes can still be seen in the walls. In 2016, when IS fled, manuscripts and the remaining prayer books were burnt inside the Church.

“The furniture of the church was very valuable, as was a cross of pure silver that, it is believed, contained a piece of the real cross; it may have been stolen by the terrorists; a celebrated, invaluable painting of the Virgin Mary was completely burned and destroyed. Missile attacks, sabotage operations, and even weather conditions all conspired to help destroy the church.” 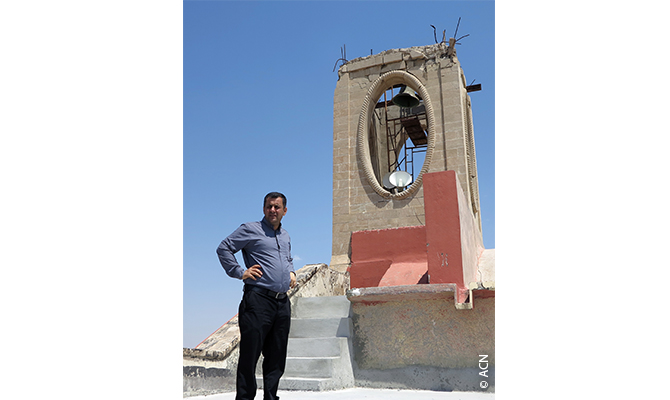 Father Yako explains the deep meaning behind the work: “The reconstruction of the Great Tahira Church is encouraging Christians to stay here.

Father Yako explains the deep meaning behind the work: “The reconstruction of the Great Tahira Church is encouraging Christians to stay here—the church dedicated in 1947 was built right next to the site of an ancient Syriac-Catholic Church that carried the same name. It is the fruit of the work and contributions of their fathers and grandfathers. Every Christian here feels that the church is part of their blood, their history and their heritage” said Father Yako. In fact, built between 1932 and 1948, farmers donated each year from their harvest to make it possible.

“Many Christians felt frustrated and hurt when, upon their return from exile in Kurdistan, they saw their church destroyed and burned. When work began, they found hope that they would worship in the church again—that its sanctity and beauty would enhance community life again”.

ACN is co- financing the restoration of Al-Tahira Church, the largest Syriac-Catholic Church in the Middle East. It is important because of its historical significance – in the underground are the remains of the former church – but also because of its notable design and artistic value: its roof rests on 22 one-piece marble pillars from Mosul. They were one of the jewels of the church and they were damaged by external and internal cracks due to the fire inside the church and the bombing of the tower; in addition the arches and columns adjacent to the altar needed repair. In 2018 the building had to be closed for prayers and religious celebrations because of risks to people’s safety. 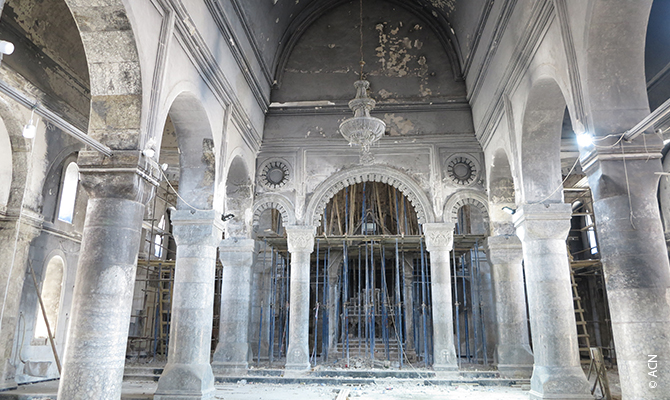 Though delayed by the coronavirus, work is continuing on the columns of the church, the roof and the dome and next will come the work on the outer porches and later the tower.

“The reconstruction project is also very important in that it is at Al-Tahira that the local Church welcomes visiting dignitaries and delegations. It is the first stop for all important visitors because of the church’s historical and sacred value. It is where major ceremonies and official events take place”.

Named in honor of the Immaculate Conception, defined as dogma by Pope Pius IX in 1854, the Al-Tahira Church wants to keep the devotion to Our Lady:  “We aim to create a panorama of the life of St. Mary the Virgin in the outer corridors, introducing visitors to the life of the saint. In a separate hall, we hope to collect and display damaged parts of the church—religious items, paintings and other objects, including parts of the wall carrying ISIS slogans. Thus may the world have evidence of what terrorism has inflicted on us all.

To the benefactors for ACN Father Yaako said: “Though delayed by the coronavirus, work is continuing on the columns of the church, the roof and the dome and next will come the work on the outer porches and later the tower. We are also rebuilding the altar. We thank all those who are contributing to the restoration of Al-Tahira. May its walls soon reverberate with prayers of the faithful!”